A trip to Berlin's bathtub

If you’re thinking of going somewhere cheap yet ever-so-slightly exotic this weekend, the Baltic Sea island of Usedom might spark your interest.

Nicknamed Berlin’s bathtub, the island, which hovers on the German-Polish border, has been popular summer resort since the late 19th century.

Although it was once a regular hideout for Prussian Royals and wealthy city dwellers, like many Germanic seaside resorts, the island nowadays caters for a more elderly demographic.


Yet it’s pocket friendly prices, sugar white beaches, abandoned GDR buildings, and absence of annoying hipsters make it an adequate choice for a quick escape from the city.

How to get there

It takes around 3-4 hours to reach Usedom from Berlin, depending on where you’re staying. We chose to go the extra stretch and stay in the Polish city of Swinoujcie, as the hotel prices were substantially cheaper over the border.

A return ticket from Berlin Hauptbanhof came to a mere 35 euros. There was only one change at Zissow around half way through the journey, which totalled 4 hours 15 minutes. If you stay at the German resort of Zinnowitz, which is the closest spa resort on the island, the journey will take about an hour less, however this area is admittedly a little more touristy and expensive.

Although Swinoujcie is notably more ‘authentic’ shall we say (not many English speakers or souvenir shops here!),   it was probably that factor that helped make it the best resort we visited on the trip. There’s a wide choice of hotels and B&B’s, and one option I found particularly appealing offered the best of both worlds - a self catering apartment with  a spa!

We stayed at the Apartmenty Nautilus located in the Baltic Sea Park, which cost 117 euro for two nights for both of us. The apartment had a clean and modern interior that comprised of a spacious living room with a sofa bed, and a box-sized bedroom with a built in wardrobe. The kitchen was basic, but had a 2 ring electric hob, so quite adequate for rustling up small meals. There was also a fridge (I have just realised, I left some rather odorous Gruyere in there, sorry Nautilus!) .

To my relief the apartment had free Wi-Fi, as some people might be disheartened to find that the only English speaking TV station we could receive was the ‘GOD’ channel. Downstairs there was a swimming pool, sauna and Jacuzzi, all of which were relatively empty. Guests have to book a place in the sauna at the reception, which is great for those who prefer to avoid those awkward cross-cultural moments (do I go naked, can I wear my bikini, what do I do with this towel? ).

Where to eat
Along Swinoujcie promenade you will find several cafes and restaurants all of which are reasonably priced. Pretty much all of them accept euro as well as polish zloty.


After waking up ravenous and slightly hungover in the morning, we decided to go all out on breakfast and ordered a feast at the beautifully picturesque Cafe Amsterdam.

We ordered two portions of scrambled egg with chives, a round of toast (well, a basket of toast), pancakes with strawberries and jam, two orange juices, a large cappuccino and an Irish coffee expecting it to cost a small fortune.  When we asked for the bill we were surprised to find it only came to 16 euro!

A little further along the promenade and you’ll find a quaint little Italian eatery called Restaurant Pinocchio. There we indulged in two pizza-sized portions of bruschetta, olives, and homemade pasta (I had a scrumptiously creamy gorgonzola, mozerella and broccoli penne). Along with a jug of red wine, the total bill for a meal that we could not finish amounted to 36 euro.

In Swinoujcie city centre, you will find several other cafes, in PolaCafe we were served a rather extravagant albeit sickly whipped cream late with banana syrup, (never trust a coffee that comes with a straw). We also visited the dirt cheap Costa coffee (no affiliation with the US cooperation), where two cappuccinos and a coke amounted to the grand total of 2 euro!
Things to do
Swinoujcie

Follow the signs along the promenade and through the forest and you will reach the nautical delight that is ‘Stawa Mlyny’, a beacon shaped like a windmill that stands on the edge of Swina beach.


A little further down the beach, through an eery kind of army training ground, you will find the Western Fort, a former Red Army HQ.  Ten Polish Zloty (around two euros) will get you entry to the museum,  a tour of the guardhouse, fire control tower and access to the souvenir shop and bar and, perhaps most importantly, toilet, as they are few and far between in that area.


A half an hour walk through Zdrojowy Park or a short taxi ride will take you to the city centre. There’s no shortage of cafes and restaurants in Swinoujcie centre however there is a very limited selection of shops and no H&M or Zara to be seen! Do not expect to be embarking on a shopping spree and be aware that the chances of buying any last minute holiday clothes are slim, unless you have a penchant for florescent coloured leggings and fleeces from Netto. 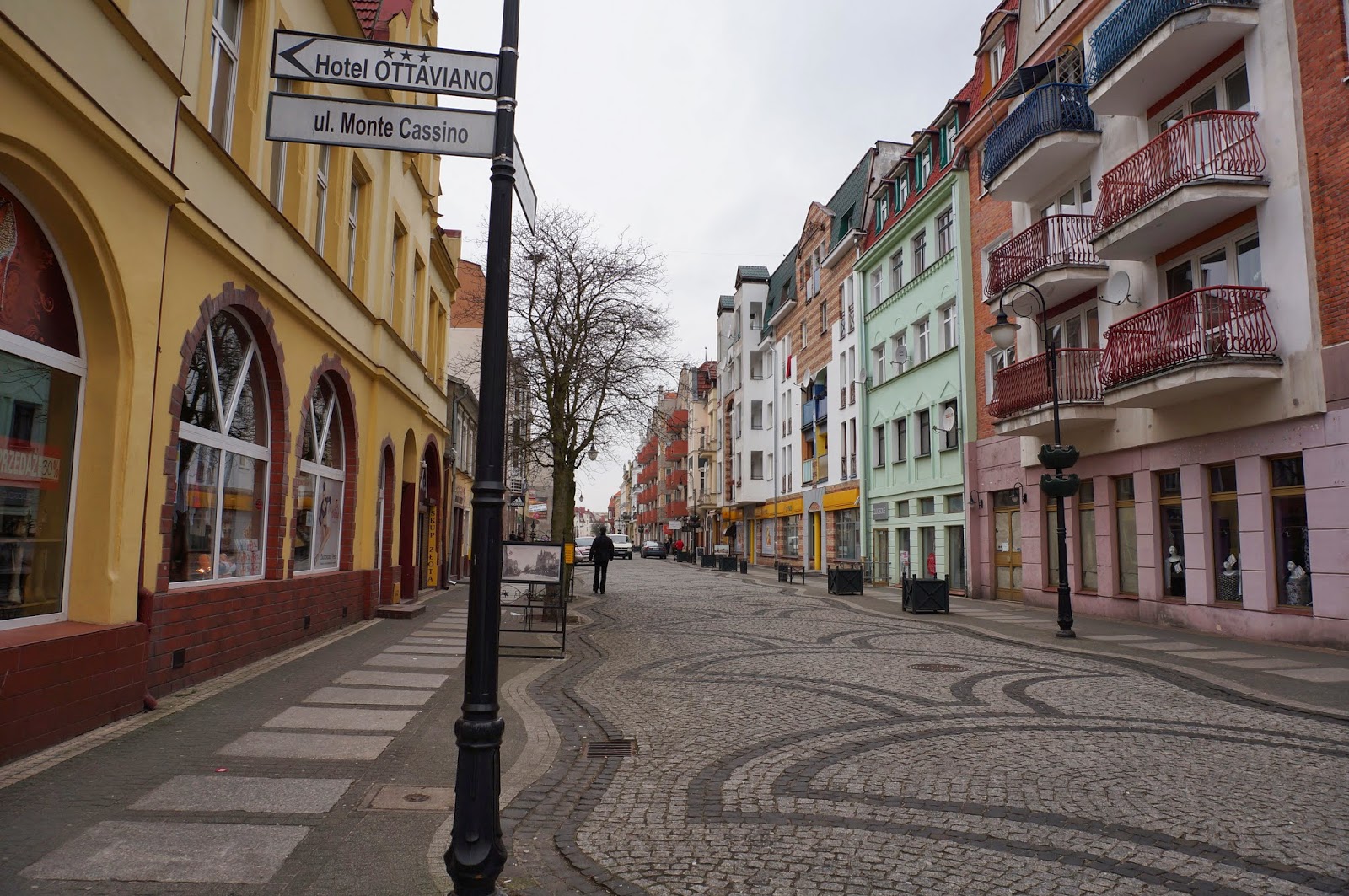 There is a harbour, and lots of brightly coloured streets that look like something out of a Wes Anderson film. There are also several supermarkets for those who want to stock up on cheap cigarettes (3 euros for a packet of Marlborough lights), and vodka (a litre in Netto for 5 euros). 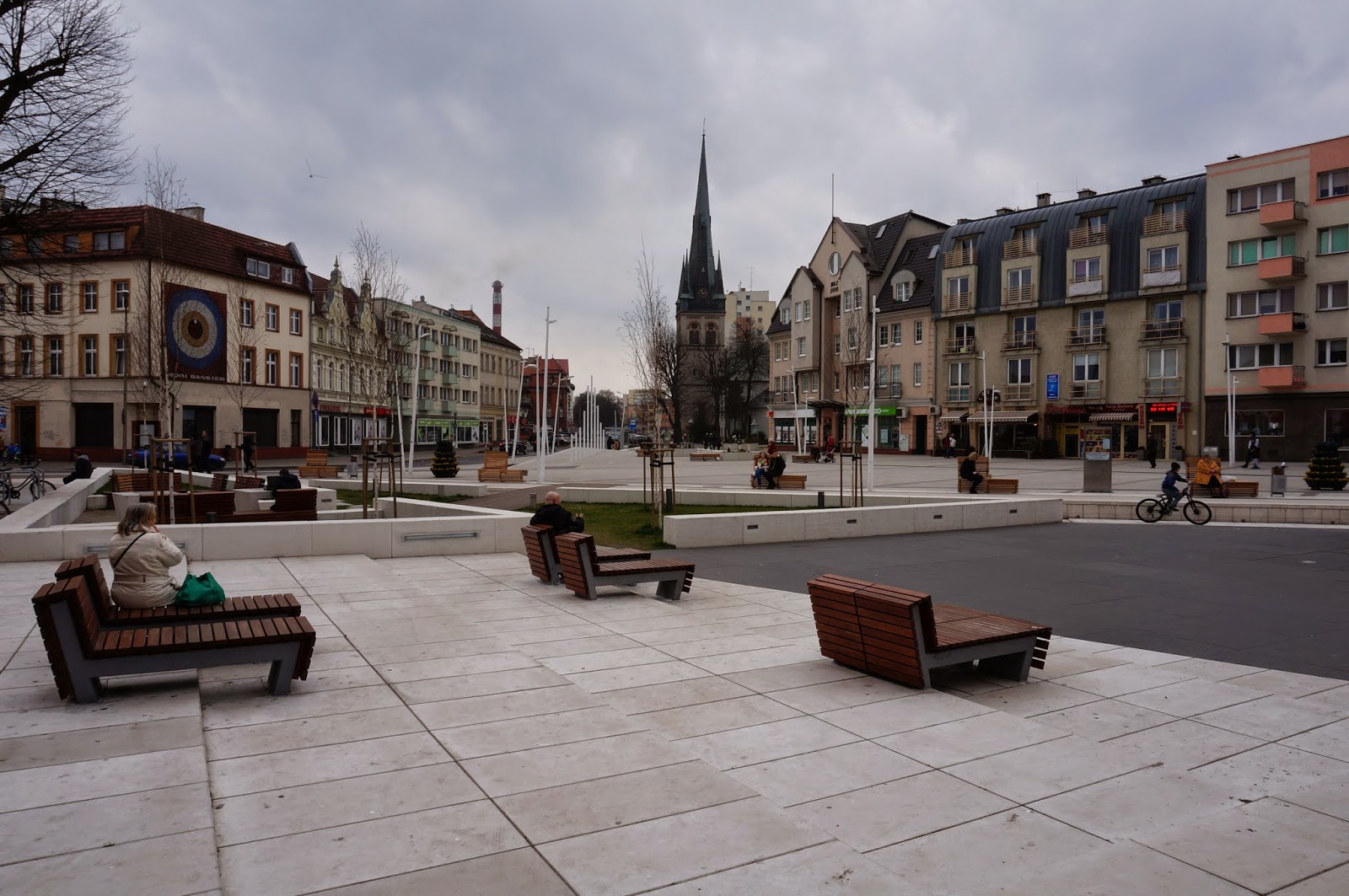 Locals fish at the harbour every day, and there is an abundance of seafood restaurants near the sea front, where you can tuck into freshly made dishes. 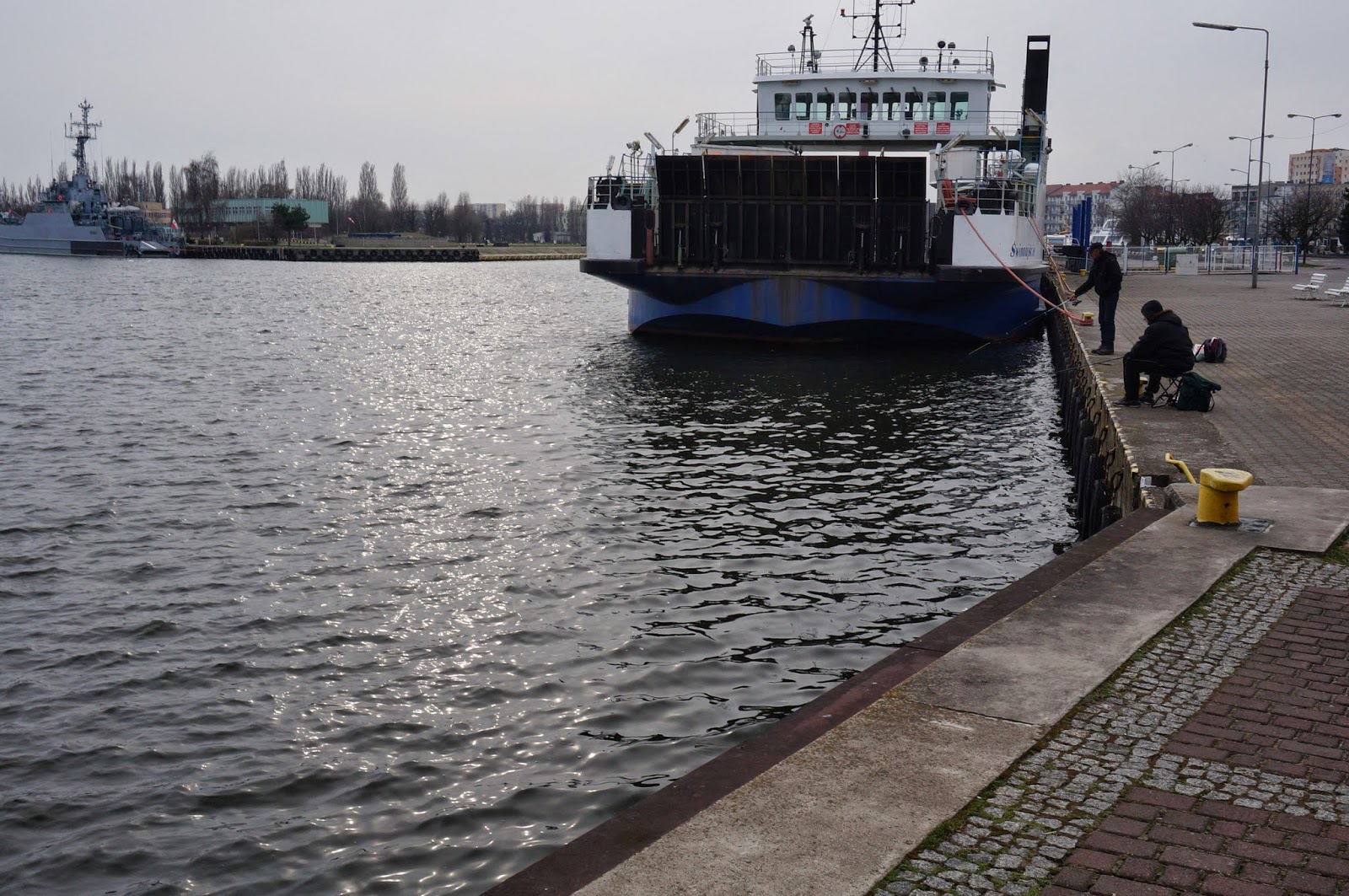 Heringsdorf
From Swinoujcie Centrum train station it’s around 15 minutes to the main Heringsdorf resort back in the German part of the island. Be sure to get off at Seebad Heringsdorf and not Heringsdorf Neuhof,  we made that mistake, there is literally nothing there and it is a bit of a hike (down and uphill) to the next station.  At Seebad you’ll be greeted by white-washed Neo-Baroque architecture, there are plenty of shops if you have a penchant for Gillets (Marco Polo, Tommy Hilfiger, Jack Wolfskin), and want to buy some souvenirs. We took a break at Terrassen Kafe overlooking the beach and it came to 12 euros for 2 coffees and 2 plates of chips, more expensive than the Polish area, but not extortionate.

The sand here is as glorious and thick as that in Swinoujcie. The only difference being, that on the beach here you have the option to rent small wicker beach seats. There is also a pier with several cafes. 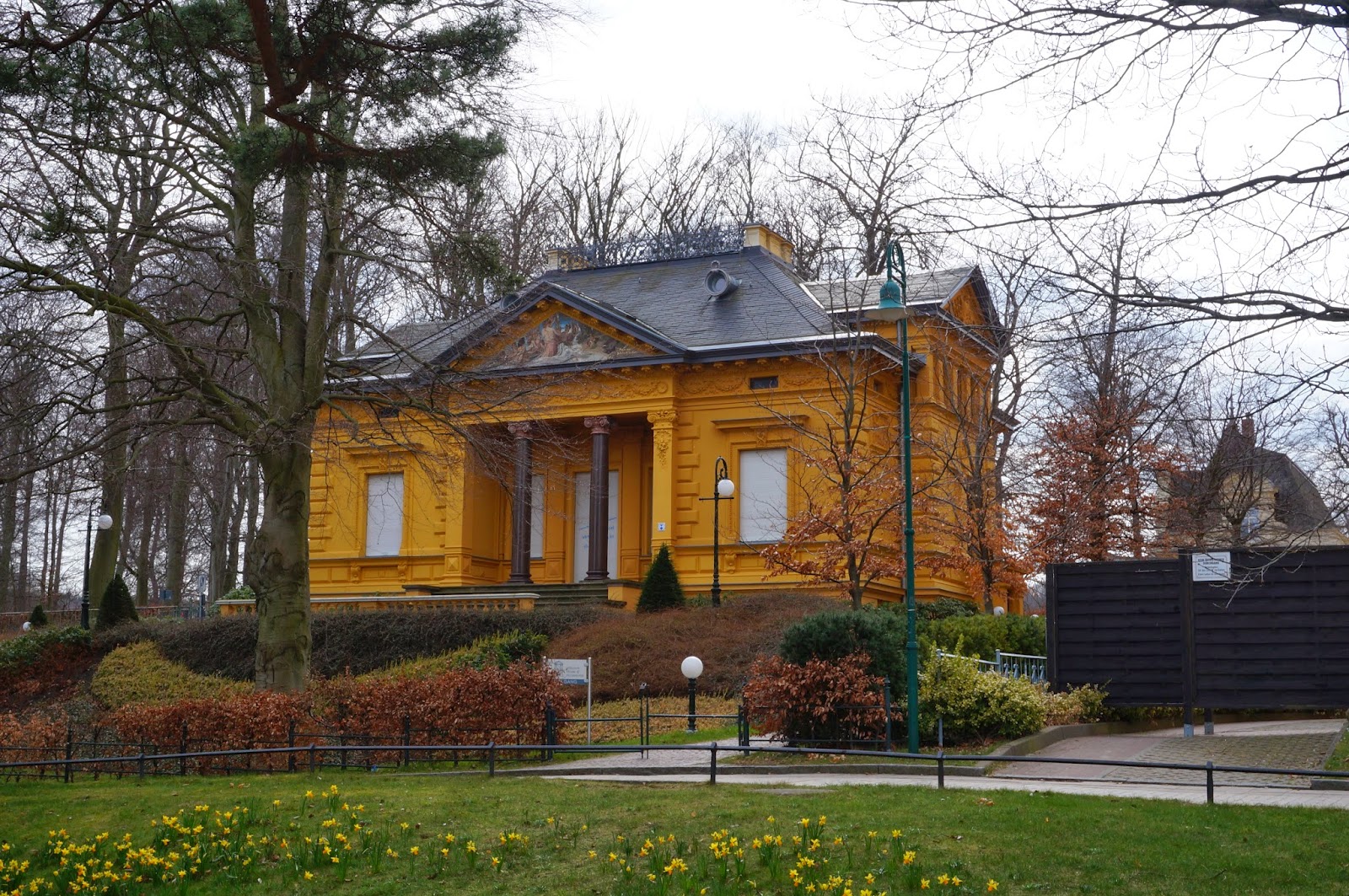 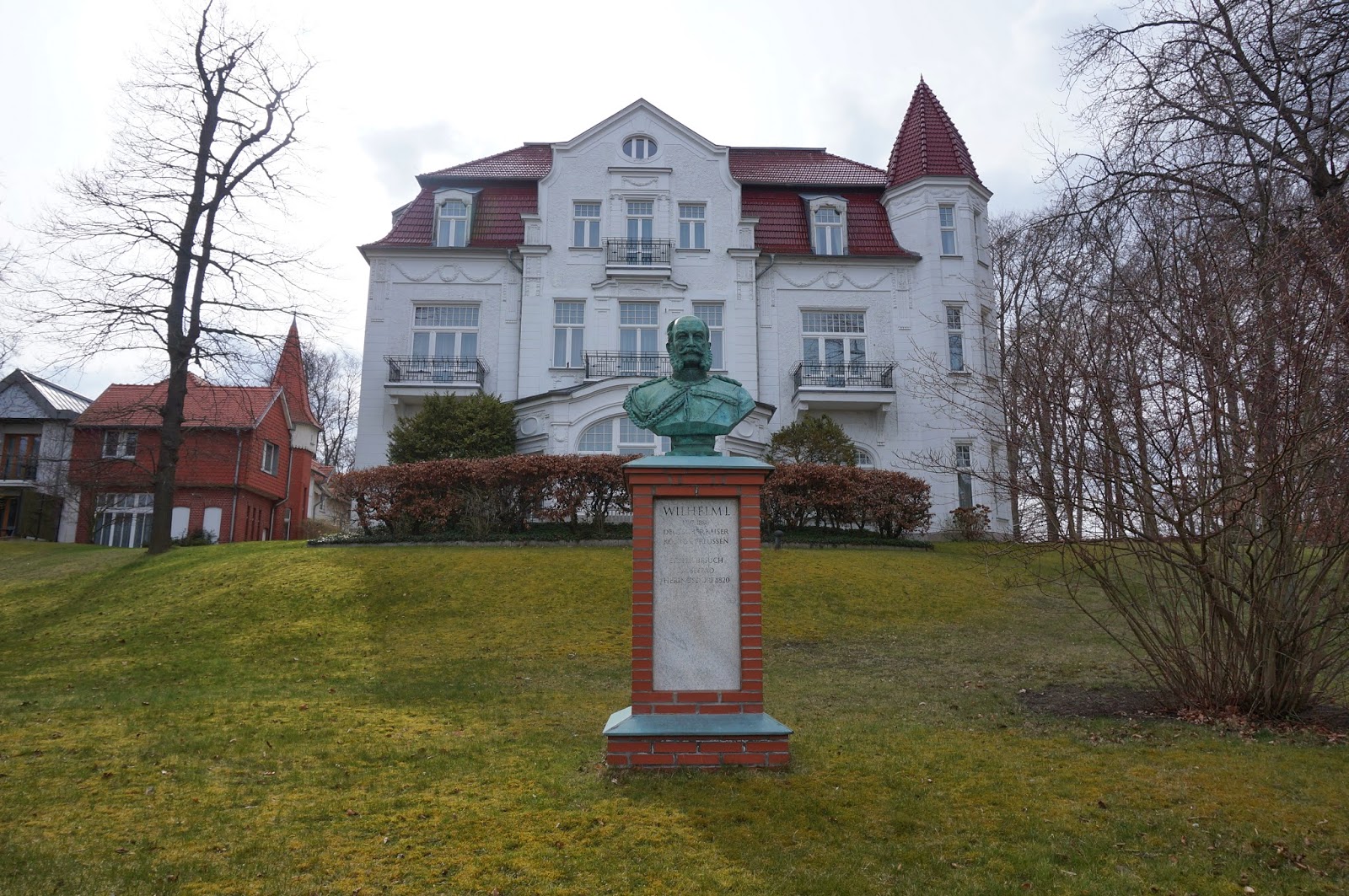 Zinnowitz
Ten more stops on the train from Seebad Heringsdorf will take you to Zinnowitz, one of the most popular resorts on the island. In terms of tourist attractions there’s certainly more to do here, but I guess it depends what your budget is, as the further West you go in the island, the more expensive it is.


If urban exploring is your thing, the menacing looking ‘KulturHaus’ is a short walk from the station. An exquisite piece of classical socialist architecture, the building was the cultural epicenter of German-Soviet relations on the island up until the 1980’s. The complex comprised of a cinema , a theater and even a TV studio where GDR television dramas were recorded. After the fall of the wall, the complex was looted, and nowadays there is a fence around it. Judging by the signs it’s going to be knocked down and built over.  If you’re in a risky mood, it’s not too difficult to jump over but be aware, you could get reported for trespassing and it’s creepy (and dark) as hell inside!

A ten minute walk from the Kulturhaus will take you to Zinnowitz sea front. At the end of pier Vineta you will come across a ‘diving capsule’, a strange mechanical contraption that plunges you into the sea. I was quite intrigued to see what creatures are dwelling in the Baltic sea, and it’s meant to go as deep as ten metres, but unfortunately when we got there it was closed! Looking at the sign it is open daily 11-16.00 and costs 8 euro per person.


Again, Zinnowitz is a little busier in terms of attractions and also has a range of shops that line the seafront. However, in terms of cafes and restaurants, this place is a bit of a rip off. We were naively enticed by the gimmicky ‘lift cafe’, (it has a mechanical floor), located just off the pier. The place was obviously a lot more family orientated with children running about and food more expensive than anywhere else. There wasn’t really anything vegetarian on the menu, so we settled for the fall back cheese and tomato pizza for 10 euro.


As usual, the further east you travel the cheaper it is. Although there are a few more attractions on the German side, I think that regards to quality in term of eating out and staying over, Swinoujcie is where you’re going to get best value for money. Also, it really isn’t far to go back over the border.

Here is a quick price breakdown of our stay: